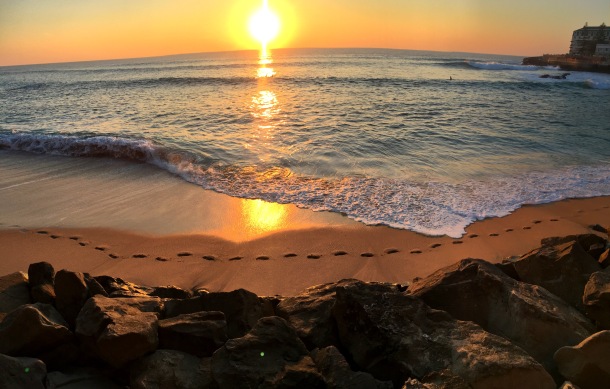 Take me back to sunny days on the beaches of…{insert name of beautiful beach, anyone will do}…when the only thing I had to worry about was getting too hot in the sun, but too cold in the water or drinking so much that I continually felt the need to pee right at that moment when I had just reached the perfect level of dryness and warmth in the sun.

The problem with escapism is…it’s more like disillusionment.  There has actually never been a moment in my life where I felt as carefree as I seem to remember through my rose-colored sun glasses.  I can remember days and weeks of walking, sitting and laying on some of the most magical beaches in the world…and yet, between the moments of excitement and awe were stress-induced anxiety attacks where I couldn’t see clearly past the end of my own nose.  These greater majority of experiences have been filled with varying levels of regret, concern, loneliness, shock, worry…and all of those other feelings that come up when we allow ourselves to get caught up in the past/present/future issues which are completely out of our control.  Sometimes for fun I throw in intense guilt and shame about things I could have done differently, just to mix it up a bit.  It’s no wonder why I always seem to find my way back to the few moments of bliss rather than the others!

So why is it that at a time which has such great potential to be the most glorious moment of my current life am I overcome with feelings about all of the places I have, can and could possibly fail?  I’ve spent quite a bit of time meditating on this very idea (not the peaceful kind of meditation that you might imagine) and after spinning around in circles I found myself to be quite dizzy, to be honest.  But, I’ve also found the culprit of my inability to fully enjoy the now: EXPECTATIONS.  Obvious.  Simple.  Easy to fix right?  Hahaha…hmmm…maybe not.

Throughout my life I’ve been collecting and creating rules.  Let’s name these rules “expectations”.  These rules tell me how to live and feel based on what I’m experiencing.  They give me guidelines and keep me from going too far out of bounds in any one direction.  Except they don’t actually do that at all.  It’s true, there are parts of me that believe things should be a certain way…usually based on how other people and society expect them to be, but there are also parts of me which fight against the regulations being forcibly implied as acceptable for me to live by.  Let me give you an example so this becomes slightly clearer about how easily our emotions can be manipulated.

I travel.  This has been my dream since I was a little girl, so I should be completely ecstatic that I’m making all of my dreams come true now…right?  Not exactly.  I’m not a trust fund baby, I didn’t have a huge savings, any credit cards, come from a rich family or even have a job that will pay for the extravagant nomad life that I aspire to have.  After finally getting settled into an apartment after 2 years of living in San Francisco and putting the finishing touches on my bedroom decor, I got laid off.  Perfect. Timing.  Even though I was half expecting it because I knew the state of the company I was working for, it still turned my life upside-down when it happened.  Taking into consideration my unrealized dreams weighed against the possibility of staying and getting a job to maintain the very basic level of existence I had created (which hadn’t included much fun or happiness) I decided to take a step towards living the life I wanted.

It was a race against time.  I had just enough money in my account to pay rent in 7 days, but if I acted speedily enough that amount of money could support me and a small army in southeast Asia for a little while as I figured things out.  Between that, my small severance package and the little bit of money I was able to recover by selling my brand new furnishings for pennies on the dollar…I had enough money to start my new life.  The only real trouble was, I had never traveled by myself before.  Ever.  I needed a travel guru ASAP.  Luckily, my best friend is German…which means he’s done everything I wanted to do (on his own) since he was old enough to walk.  Every day during that week of preparation (where I single-handedly elevated the sales of Amazon to become the monstrously successful giant that it is today) he told me what I’d need to do and buy in order to be ready.  However, there was one thing I wasn’t prepared for…actually that’s not completely true because there were all kinds of things I wasn’t prepared for and could only figure out or learn through experience…but the one I wasn’t considering was people’s reactions to my news.

Out of my anticipation and excitement, I started announcing the news of my upcoming trip to friends and family expecting…well not sure what I was expecting, but not considering how many responses would be in complete opposition to mine.  I was met with only a handful of genuinely happy and supportive reactions to my decision while the rest bordered on over-active imagination, movie-based, fear-induced anxiety.  I understand, the people who responded this way had never actually traveled internationally like this and were basing their opinions on what they’d seen in the cinema…but they were projected at me as if I was also meant to share and take on the responsibility of their fears, which I didn’t agree with or have the need to adopt.  Some were very open about it, others masked it through asking every possible question they could think of…trying to gain, for themselves, a level of comfort and control in my future.  As for me, I didn’t need that level of understanding.  I’d become accustomed to not being able to predict the future in my previous 10+ years of unemployment, unsuccessful business attempts, crazy roommates, health issues, personal and family difficulties, heartbreak and especially while living homeless for 4.5 months, running out of money, commuting for 5 hours a day to a boring temp job and the plethora of other difficult experiences I had while attempting to establish myself in San Francisco.

I use the term “understand” lightly but to an extent, I understood that I was leading into an unknown future and circumstance.  I didn’t have any personal experience to verify or substantiate even the possibilities that may come up, but I wanted to believe that in exploring the unknown, I would somehow find my way to the place I subconsciously searched for every moment of every day…Home.  But this was difficult when people were constantly pushing me towards over-analyzation of circumstances which had not, and likely would not even occur because they heard someone tell a story of someone who knew someone who had a situation which could have potentially been dangerous.  Little known fact: dangerous things happen EVERYWHERE.  Nowhere is exempt.  I’d had terrible things happen to me in the safest, most unlikely places…so was going into foreign territory actually any worse?

In the end, I had to completely shut people down when they started asking (a million) questions and sharing all of the (unsubstantiated) reasons they would personally be afraid to do what I was doing.  In the end, all we have is our own experience and whatever happens to us is unique to what’s possible for another, so as much as I appreciated the love and concern of others, I chose to believe their fears were invalid for my future.  After all, can anyone actually predict what will happen to another?  It took some extreme courage and mental clarity, but I began an adventure completely blind…not knowing what I would see or expect, but hoping for the best.

I can tell you now, it hasn’t been all fun and games.  There have been some extremely challenging times and things I never knew I’d have to figure out how to survive…but in the end, the more I give up having to know and understand everything…the better my life seems to get.  The expectations that I’ve taught myself to have or have adopted by the influence of others don’t act as fact or even the best likely scenario, they create a limited possibility of what MIGHT be.  And for that, I’d much rather roll the dice and see what other options the Universe  has in store for me.

Being free from the rules of expectations opens us up to the possibilities of creating our OWN future…not what someone else believes we can or are creating.  We each have the rights and abilities to make life into what WE want…and for that, it’s important to give up the rules we’ve accepted.  When I give up the need for my life to look and act like I expected, every day becomes a treat.  Every moment becomes the moment of a lifetime…and the future becomes a dream that I can truly live!

One thought on “Rose-Colored Disillusionmentism.”