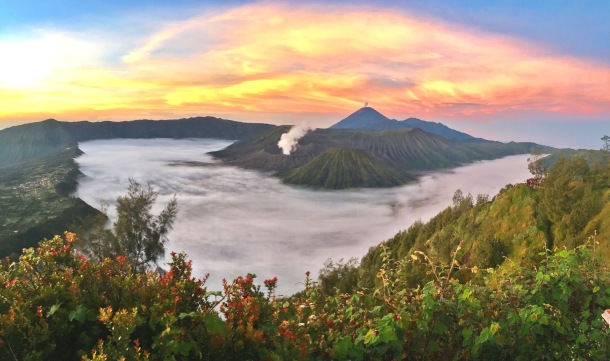 What is inner strength and power?  How can we tap into it?  How do we figure out what we’re capable of?  And why do we spend most of our lives not believing that place within us exists or that it’s possible to learn how to utilize it at will?  It’s true, when a situation comes up where that power is needed OR ELSE, it kicks in…but what about all of the times we really want to access it but aren’t able to quite get there?

If you look at people and what they’re capable of you see and hear stories like this all the time.  When I was living in Malaysia I met a traveler who had come out of a terrible tragedy 2 weeks earlier.  He had been traveling with a best friend of his in another country when the bus they were on got into an accident and somehow flipped.  Unfortunately his friend and many of the other passengers didn’t make it off of that bus, and he laid there waiting for relief, a rescue vehicle, police car…something…but nothing and no one came.  He realized that in order to get to the hospital (as he was also badly injured) he’d have to get out of the bus and find his way to a hospital.  Fortunately he met another kind traveler who helped him get the medical attention he needed and he was able to begin the physical healing process.  When I met him and heard his story only a couple of weeks later, he was meeting up with that amazing traveling stranger for the first time since the accident and he was absolutely elated!  I couldn’t believe what I was hearing…It was a beautiful reunion coming out of an absolutely horrifying story (maybe the worst out of all the stories I had heard)…but I was most impressed by what this young man was able to do in the deepest, darkest of moments when I, myself, might be tempted to give up.

I honestly don’t believe anything I’ve gone through has been equal to that kind of magnitude, but I realize there have been times when I was able to be so much stronger than what I thought I could be.

For example, when I moved to San Francisco I was coming from owning and running my own private coaching practice in DC, but I never felt strong enough to sell myself or my services even though I felt like I had something powerful to share; so it was failing for three years as I tried to get it off the ground.  I moved to San Francisco after having a life-changing experience which undeniably told me it was time to move and try my luck in the most expensive city in the United States.  I had very little money, no job and no place to stay…but I had this feeling that I couldn’t deny from within which told me this was something I HAD to do, regardless of how difficult it might seem.

Finding my way across the country seemed to come really easily.  Everything came together quickly and naturally, but in my attempts to find housing and a job I had been shot down many times.  Recruiters told me I needed to be local in order to be considered and housing wanted $5,000, a background check, blood/hair/urine analysis, fingerprints, your first and second born child and any collateral you might have…just to get into an apartment for a temporary sublet!  Maybe it wasn’t quite that bad, but it was pretty close.  This was the worst time for housing in the history of San Francisco…Perfect.  Timing.  But I knew what had to be done, so I came anyway.  Like a nut-job.  I somehow knew that even though it was going to be difficult, it would come together and work.  When I arrived, I didn’t even have a place to stay that first night.  Again…NUT-JOB!  But I felt really strongly like something would come together before the end of the day.  Long story short, I met a girl who gave me a place to stay for the first month I was there.  I slept on a dirty concrete floor, covered by flees.  Yes, filthy dirty, disgusting, biting insects.  COVERED.  Actually, if I could have slept that would have been a relief, but with the noisiest neighbors who I assume were drug dealers upstairs (they were constantly moving furniture and jumping up and down at all hours of the day and night, so drug dealers or dancers?)…I didn’t sleep much at all.  I also quickly ran out of money that first month…ZERO dollars in the bank…and hadn’t found a job yet.

I knew things had hit rock bottom the night I was sitting on a bench at my favorite park (Alta Plaza Park in Pac Heights) looking down the street at the Bay…at 9:30pm…bags in hand…desperate and crying because I really didn’t want to sleep in the park that night…without a tent.  I was meant to start a temp job the next day too, so I obviously wasn’t going to be able to make it if I had to sleep in the park.  I had no where to charge my phone, get ready…and let’s face it…there was no way I was going to be able to sleep (even at the high level of sleep deprivation I was already at).  It looked and felt like a pretty dark place.  I had FELT like something would come up for me…but at this late hour with no options, my faith was faltering.  Suddenly something happened which I didn’t expect: one of my best friends from DC who I had messaged earlier (to ask for prayers! haha) had family who were willing to take me in for ONE night only.  I can’t tell you how happy I was with that ONE night promise!  Long story short, they let me stay with them for 3 days and then again later in my journey to find housing (for another week and a half).

I started my temp job and after 3 days I had another connection in North East Bay who was willing to let me stay with their family for almost 5 weeks!  From there I commuted 5.5 hours a day to a job that had no potential, just to give me some “credit” with the recruiting agency (one of 6 that I was going through) so they’d send better offers my way.  Later because of my willingness and sacrifice I was able to get a temp job in the financial district where I worked for over a year and a half until they downsized and I was laid off…thereby leading to my journey to travel the world.

After starting my second temp job I continued to be homeless…for a total of 4.5 months…moving day to day or week to week while I saved as much money as I could working for lower pay than I was worth.  I moved more than 9 times during that period…many of which were extremely last minute with only minutes or hours to make a decision and find an option.  I also only ended up having to pay for 2 weeks of that entire time.  I had met some of the nicest, most considerate strangers in one of the biggest, toughest cities…and I was constantly impressed and humbled by their generosity to a complete stranger.  I owe them…everything!  But I tell this story because…even when I look back at my own experience I am still amazed by the things I was willing and able to go through in pursuit for something better.  It’s true, there may have been easier and less traumatic ways for others to have gone through the transition…and I haven’t given you all of the details in and around it…but I was able to somehow get my mind, heart and the very Core of my being to unite…and what came out of it was strength, power and abilities that I never knew I had!

Moral of the Story: Just because it’s difficult doesn’t mean you’re doing it wrong.  Sometimes we are pulled into or lead ourselves into impossible situations to prove to ourselves what we’re truly capable of…and the power and force that comes shooting out of us…that’s the REAL potential of what we have inside.  That’s the REAL us.  Creating new, overcoming all, never stopping… and beautiful!